In this conversation, a political office-holder is seen talking with an acquaintance on their resolution to retain power in 2019. Soon, the conversation moves from how to achieve their resolution to the invocations of God to fish out their political opponents or enemies that may want to put sand in their garri (garri is a staple grain in Nigeria). Such is the mindset of a typical Nigerian politician. It’s very easy for them to bring God into conversations that may not even concern God.

In the end, one of the people talking concludes
that their best bet for winning the election would
be provide food to voters. This statement is tricky. One may want to ask: provide ‘food’ in terms of food security or food to lure voters to vote for their party?

This is a a reflection on voters’ suppression and victimization in Nigeria. Overall, it reveals how state’s security operatives are being deployed by the Federal Government to intimidate opposition politicians.

Even though this cartoon is a mockery of the gubernatorial election in Èkìtì State, it casts a broader light on the reality of democracy and electoral processes in Nigeria.

Here, we see a 6-sided coffin (probably representing the 6 geopolitical zones in the country) with the inscription “free and fair election” ready to be lowered into the ground by politicians, the Independent National Electoral Commission (INEC).

A gubernatorial election was held in Èkìtì State on July 14, 2018. The election was marred with irregularities. For one, members of the two most viable political parties in the state – the People’s Democratic Party (PDP) and the All Progressives Congress (APC) – were captured in a BBC report giving money to voters for votes.

Another thing that is quite symbolic in this cartoon is how there is a skeletal hand protruding from the coffin ready to be buried. This implies that stakeholders in Nigerian democracy are hellbent on burring whatever is left of democracy in the country after years of fraudulent democratic processes.

This cartoon, therefore, is a commentary on how politicians, INEC, and voters are all partners in ‘killing’ and burying free and fair election in Nigeria.

Nigeria’s population is currently estimated to be 182 million, and half of it is made of people under the age of 30. As a result, many people and organizations have underscored the power of Nigerian youth in changing the fate of the country.

In this cartoon, on one side is the Chairman of the Independent National Electoral Commission (INEC), Prof. Mahmood Yakubu. He is quoted saying that “youth may decide 2019 election result”. On the other side is a line of youth waiting to collect 5,000 Naira (around $15) to vote for a “figurehead”.

This cartoon takes it a step further, it identifies some of the vices often engaged in by Nigerian youth. With this logic, the cartoonist is implying that Nigerian youth may not be responsible enough to support true democracy in the country. Some of the vices identified are: indecent dressing and excessive reliance on music, addiction to codeine and Tramadol (see this link: https://youtu.be/-I_Lche2otU for a BBC documentary on drug abuse among Nigerian youth), sports betting, and dependence on artificial fashion items.

Also worthy of note is the image of a young man with big biceps who seems proud to be part of the group that would snatch ballot boxes during elections.

These are the ironic ways youth will decide the result of the 2019 elections.

Here, we see two members of the All Progressives Congress (APC) begging some aggrieved members not to leave. They are not just begging, they are doing so with wrapped gift packages.

The kneeling members, from all indications, look like President Muhammadu Buhari and the national chairman of the APC, Mr. Adams Oshiomole.

Perhaps the most striking feature of this cartoon are the backpacks and travel bags of the defecting members (Senators and Representatives). It is possible those bags are filled with loots.

This is a cartoon on voters’ apathy. People are seen talking on the street on why they see no point in voting because they believe politicians rig elections and their votes do not count. In agreement, a woman says all she uses her voter card for is to tender it as an identity card at her bank. 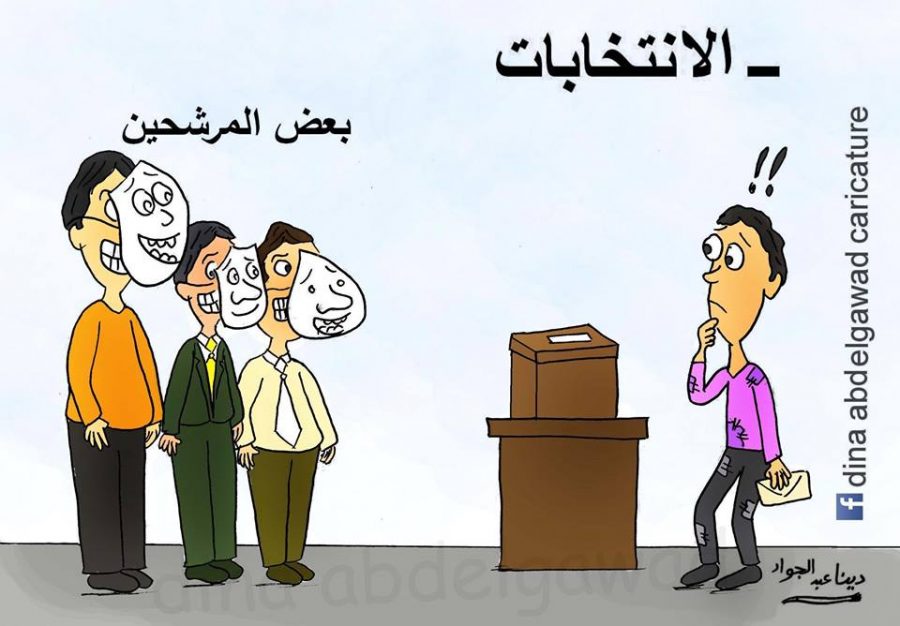 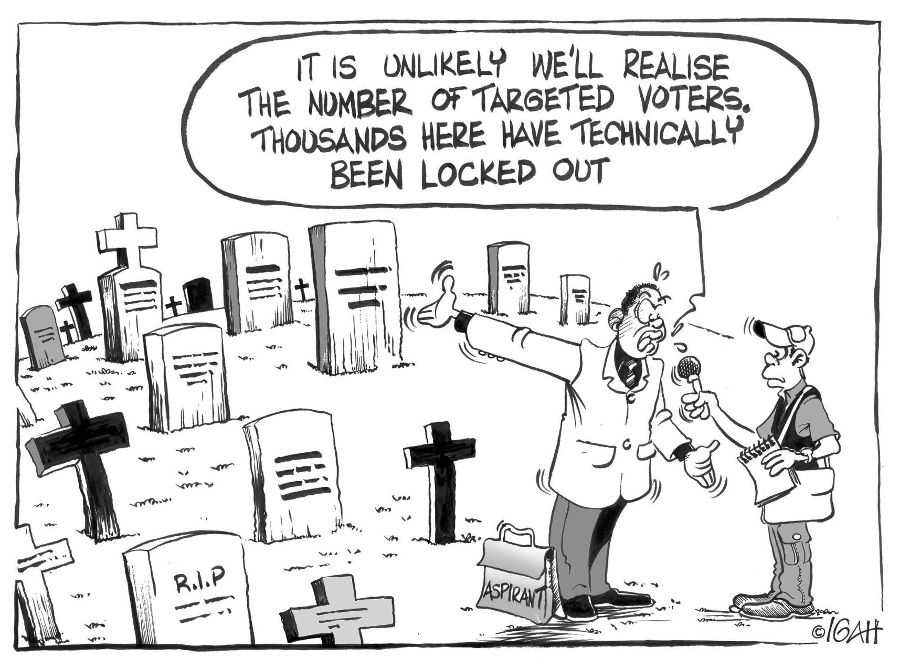