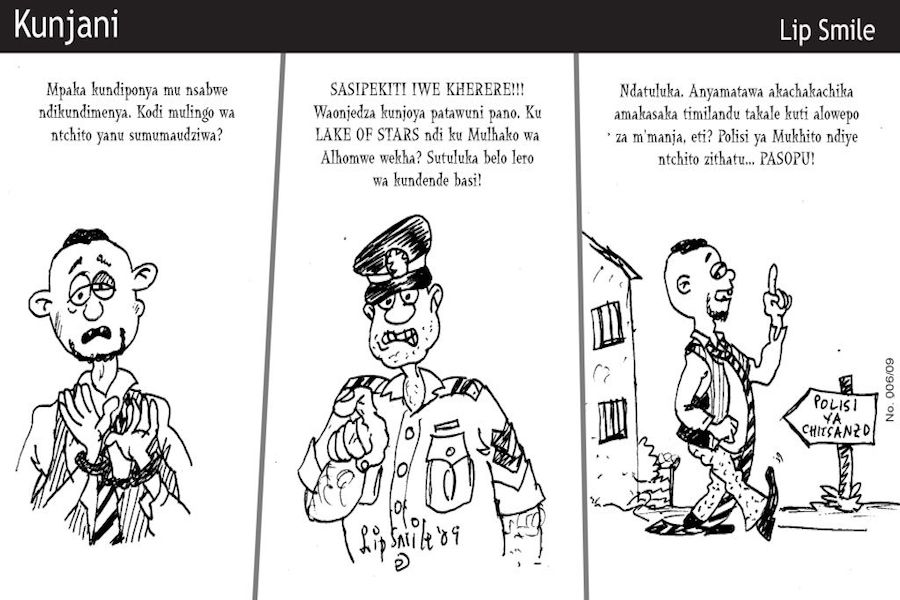 Cartoon 1:  Kunjani complains about boot-camp treatment by police in a holding cell.
Cartoon 2:  The officer rebukes the suspect (Kunjani) saying that  he should not have enjoyed himself during Mothers Day by dancing and drinking himself silly during the international Lake of Stars event (Refer to Cartoon – “Kunjani Cellebrates Mothers’ Day in Style”) and attending the Mlhako wa Alhomwe event (a traditional grouping formed by President Bingu wa Mutharika  to revitalize Lomwe culture) .
Cartoon 3: He is seen walking out of the ‘Model Police’ station. He complains about the police saying (almost to himself):
“Just because you are broke you think you should pick old scores and cases to force people to bribe! Impossible. With the new Inspector General of Police (a Mr. Peter Mukhito),  you will all be arrested!”
NOTE: CID and other police officers revisit old case files to open new cases when they are bloke. The idea is to extort moneys from people.