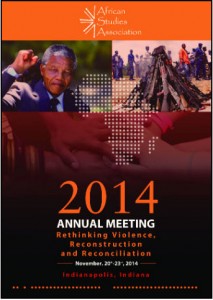 The annual African Studies Association conference met last month in Indianapolis and among its numerous, fascinating sessions was one dedicated to cartooning in Africa. Presenting in the session were, Dr. Baba Jallow from Creighton University, Dr. Alexie Tcheuyap from the University of Toronto, Dr. Tejumola Olaniyan from the University of Wisconsin-Madison, and Dr. Paula Callus from Bournemouth University. Each panel member presented on various aspects of political cartooning and animation from Africa, the following is a brief synopsis on the papers presented.

Dr. Jallow began the session with his paper, “From Saint to Devil: the Visual Transformations of Kwame Nkrumah in the Evening News, 1961-1966.” His presentation, which included many cartoon examples by artists such as Ghanatta, traced the changes in representation of Kwame Nkrumah in political cartoons. Jallow argued that, prior to 1966, Nkrumah was illustrated by cartoonists as a saint-like figure. Nkrumah’s policies against colonialism and neo-colonialism and his pan-African goals were also favorably illustrated. However, after the military coup that overthrew Nkrumah’s government in 1966, cartoonists rapidly shifted their representations of him towards that of the devil. Nkrumah began to appear as an octopus or a serpent, strangling the state. 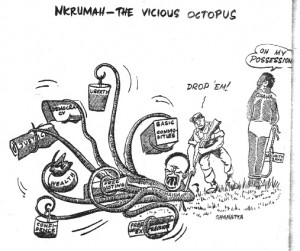 Jallow’s paper considered what these changes in representations might mean and how political cartoons can complicate the nature of historical evidence.

Dr. Tcheuyap’s paper, “Cinema Le Popoli: Cartoons and the Political Imagination in Le Messager newspaper” considered the essential role that cartooning played in Cameroon in the 1990s as a startegy to critique the state. Particulary, Tcheuyap focused on the aesthetics and cartoons generated by Nyemb Popoli and his comic strip Cinema le Popoli: 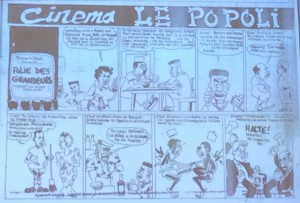 Tcheuyap’s paper discussed in detail the cartooning of Popoli and the use of a narrative form and reoccurring characters in Cinema le Popoli to critique the president and the state. Tcheuyap argued that in the 1990s cartoons took representation out of the hands of the autocratic state and subverted and critiqued the political landscape of the time while simultaneously generating new forms of aesthetics.

Dr. Olaniyan’s paper, “Cartooning the Head of the Head of State,” considered how cartoonists draw the central target of their political cartoons, the politicians. Olaniyan considered the possible links and differences between the discredited pseudo-science of the 19th century, Physiognomy (which claimed that it was possible to deduce behavior and character from facial features), and cartoonists’ use of the caricature to produce meaning. Olaniyan focused his paper on the portrayals of heads of states, including the following examples: 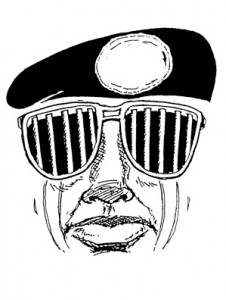 Dr. Callus’s paper, “The Rise of Kenyan Political Animation: Tactics of Subversion,” did not focus on political cartooning, but on the rise of political animation in Kenyan after the post-election violence of 2007-2008. The catalyst for this rise in animation, argued Callus, was Gado‘s release of The XYZ Show. Callus provided many examples of political animation including, Wageuzi 2012 by Andrew Kaggia, the Green Lords of the Jungle by Gatumia Gatumia, and others. Callus discussed in detail the network that animation artists participate in and the way in which they straddle the space between the popular and the politically critical.