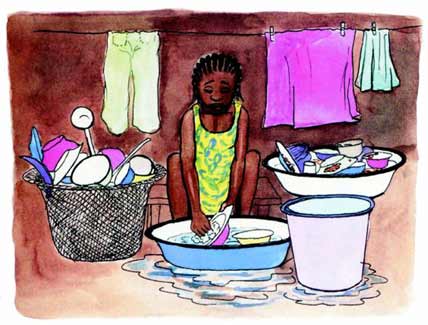 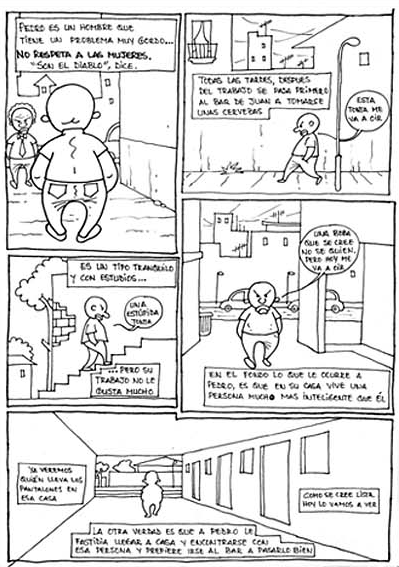 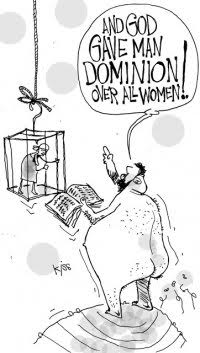 The sex strike
Man: Hey honey!! What’s that again??
Woman: Women are striking against sex! Didn’t you hear about that? 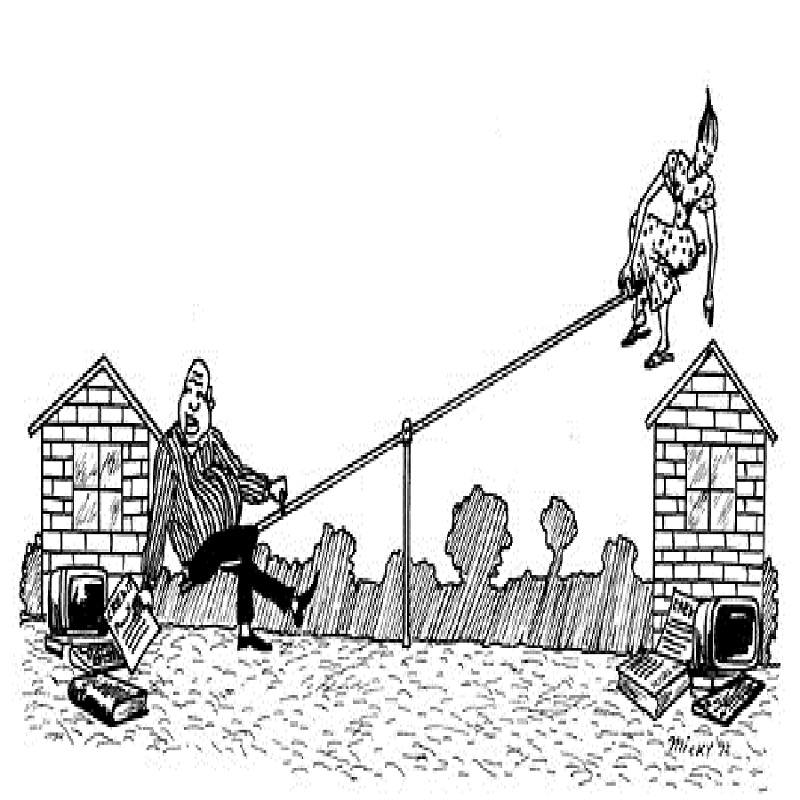 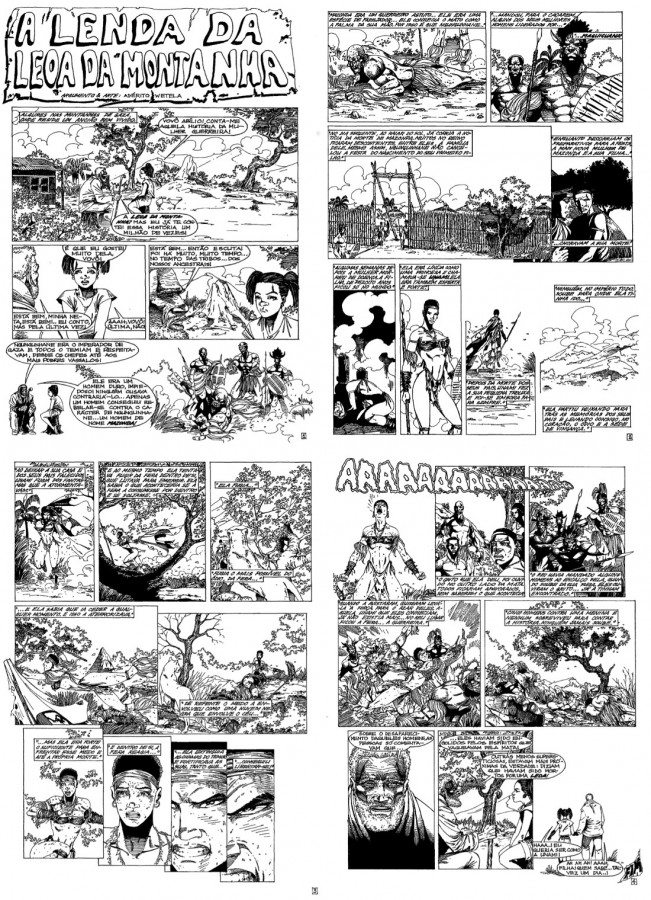 Tite: The Legend of the Mountain Lioness

Story and Drawings by Adérito Wetela

(Horizontal) Panel I
First Caption: Somewhere in the Gaza Mountains where a wise old man well on in his years lives.

Girl: Grandpa Abílio! Tell me that story about the woman warrior!

Grandpa: The mountain lioness? But I’ve told you that story a million times!

Panel III
Girl: It’s just I like it a lot, grandpa!

Grandpas: Alright, my granddaughter, alright. I’ll tell it once but this will be the last time.

Girl: Ah, grandpa! Not for the last time!

Grandpa: Okay. Listen then. It was a long, long time ago. In the time of the tribes… of our ancestors!

Panel IV
Grandpa: Ngungunhane was the ruler of Gaza and everyone feared and respected him, from the chiefs to the poorest servants.

Grandpa (continued): He was a hard, merciless man and no one dared come against him. Only one man managed to rebel against Ngungunhane. . . a man named Mazonda!

Grandpa (narrating): Mazonda was a shrewd warrior… He was a type of tracker… he knew the brush like the palm of his hand. For that reason, Ngungunhane. . .

Grandpa (narrating): sent his best men to him down in a group led by. . . Maguiguana.

Grandpa (narrating): The following day, when the sun came up, news of Mazonda’s death was already traveling. Many in the kingdom were unhappy, among them, Mazonda’s family. In spite of this, Ngungunhane did not cancel the the celebration of his first son’s birth.

Grandpa (narrating): While the preparations for the celebration were underway, Mazonda’s youngest wife and her daughter wept over his death.

Grandpa (narrating): Some weeks afterward, Mazonda’s wife died of illness. Her daughter, who was 18, was left alone in the world.

Grandpa (narrating): She was beautiful like a princess and she was called “Unami.” She was smart and strong.

Grandpa (narrating): After her parents’ deaths, Unami collected her things in a small bundle and left, planning never to return.

Grandpa (narrating): No one in the whole empire knew where she had gone. She departed leaving memories of her parents and taking hate and a hunger for revenge in her heart.

Grandpa (narrating): In leaving her family home and her fallen parents, Unami was also running away from the ghosts that haunted her.

Grandpa (narrating): At the same time, she tried to run from the wild beast inside her that struggled to get out. She knew that what would happen if the beast consumed her from within and turned loose.

Grandpa (narrating): She ran. She ran as far away as possible from hate, from the beast. . .

Grandpa (narrating): She knew that she was going to give in at any moment and that terrified her.

Grandpa (narrating): Suddenly, the fear enveloped her like a black cloud envelops the sky. . .

Grandpa (narrating): But she was strong enough to confront that fear and even death itself.

Grandpa (narrating): And inside herself, the beast reacted. . .

Grandpa (narrating): She extinguished the flames of fear and strengthened her own, so much so. . .

Grandpa (narrating): that it managed to free itself.

Grandpa (narrating): The yell she let out was heard on the other side of the forest. Everyone was petrified and didn’t know what was happening.

Grandpa (narrating): The king had sent men to follow her trail when he learned that she had run away. They heard her yell. . . and they had already found her.

Grandpa (narrating): When they caught sight of her, they wanted to take her by force, yet, unluckily for them, the Unami they knew no longer existed. . . In her place, there was a beast. . . a warrior.

Grandpa (narrating): Five men against one girl and not one survived to tell the story. No one ever found out the truth.

Grandpa (pictured): With regard to the disappearance of those men, the people just said that . . .

Grandpa (pictured): they had been swallowed by the spirits that roved through the forest.

Grandpa (pictured): Others who were less superstitious were closer to the truth: they said that they had been killed by a lioness. 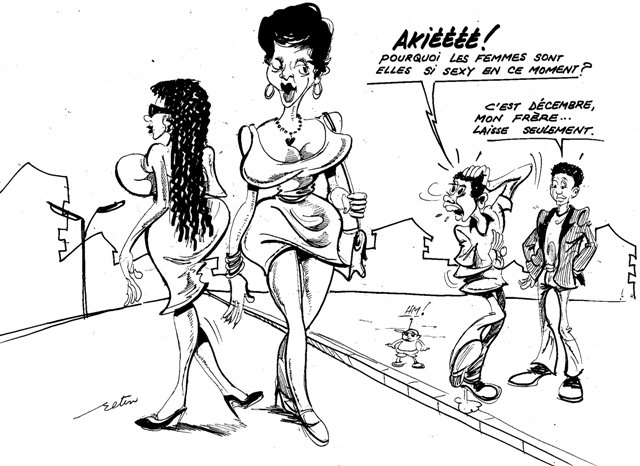 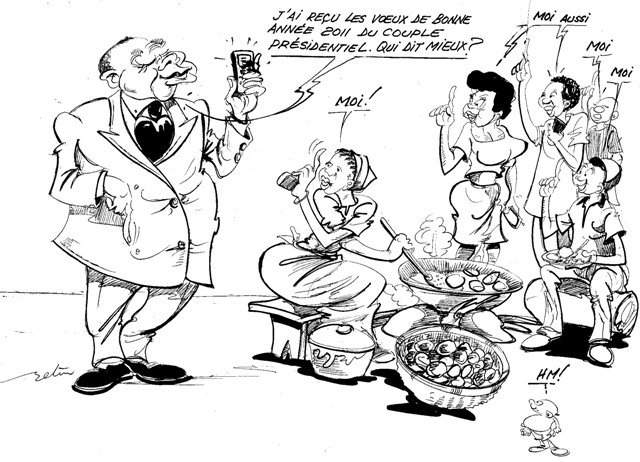 – “I received the presidential couple’s New Year’s greeting. Who can say better?”
– “Me!” 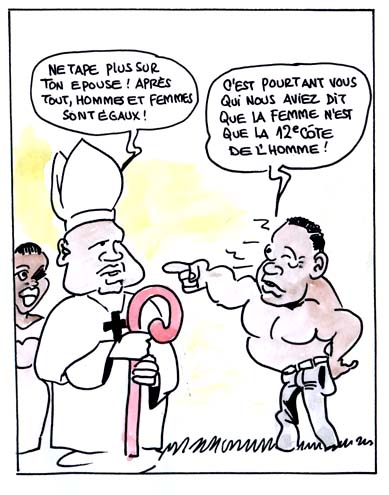 – “Don’t slap your wife anymore! After all, men are women are equals!” – “Yet it was you who said that a woman is only the 12th rib of man.”