Khalid Albaih – You May Change Your Status Here, Ess is playing with words while also taking us through the mind of a typical Nigerian politician running for an office.

In what looks like President Muhammadu Buhari having a conversation with a member of his cabinet or party, Ess mocks the leadership of the All Progressives Congress’ for failing to keep up with its campaign promises, and then declares the party “rootless”.

Obe Ess – No Condition Is Permanent

This is a conversation between two individuals on how they voted in a gubernatorial election and how they would like to vote in the general elections in 2019.

Here, there is a man that was “settled” to vote in a certain way but voted otherwise. “Settled” in the Nigerian parlance could mean “bribed”. So, the man was bribed to vote for one candidate but went for “change” instead. In this context, “change” is a loaded word.

First, change could mean transformation or transition from one state to another. Second, it may refer to the campaign slogan used by the members of the All Progressives Congress (APC) during the 2015 electioneering process. Third, it may have monetary undertones. It could refer to what one gets after a transaction. Or, also in the Nigerian parlance, a small amount of money that one begs for or gifted.

Therefore, in this instance, the man who voted for change, voted for the APC. He might have done so because he really wanted a change in government, or because he was given a certain amount of money to vote for APC.

The big picture in this cartoon is that vote-buying and -selling is an issue in Nigerian democratic processes. 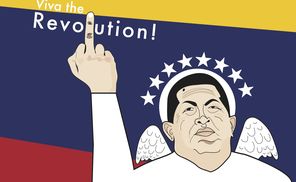