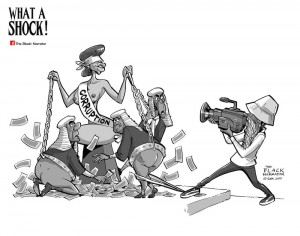 The Black Narrator, “What a Shock.”

On November 14, 2015 Professor Joseph Oduro-Frimpong gave a talk at the University of Wisconsin-Madison entitled “‘What a Shock’: Civic Activism and Resistance in The Black Narrator’s Cartoons.” Oduro-Frimpong completed a PhD in Cultural Anthropology at Southern Illinois University, Carbondale and he is currently an Assistant Professor in the Department for Arts and Sciences at Ashehi University College in Ghana. During his visit to Madison, we had the opportunity to sit down and discuss political cartooning in Ghana and its value to academic and non-academic audiences.

Oduro-Frimpong first developed an interest in studying political cartoons when conducting his PhD research on Ghanaian popular culture. In addition to cartoons, he examined video films, obituary posters, and vehicle inscriptions. “Understanding [popular culture] is important because it gives us a broader understanding of the political environment within a particular locale such as Ghana. For a long time, I think scholarly interest in politics has been from the top down, looking at various structures and institutions. In terms of political participation, it is not viewed from the grassroots.” For Oduro-Frimpong, the study of politics in Ghana has too often focused on the state and state actors at the expense of civil society and civic activism. He sees cartoonists such as the Black Narrator as important political commentators in Ghana because they “explore themes that resonate with the masses and give a more holistic picture of politics on the ground.”

Earlier this year, Oduro-Frimpong organized a cartoon exhibition entitled “The Cartoon is Satire” in Accra, Ghana to showcase the work of prominent Ghanaian cartoonists and promote the study of political cartoons in Ghana.

“The exhibit was a success on two levels. One was that someone, defined as an academic, in Ghana was interested in cartoons, which Ghanaians take for granted and do not value as having an intellectual importance. The other was the importance given to cartoons within an exhibition space. On the opening night of the reception we had a lot of people come in, both academics and non-academics. Others wrote about it in the newspapers suggesting that readers check out the exhibit. People were surprised that someone would pay attention to cartoons.”

Even though many were surprised to find a university professor conducting research on the cartoons — which most only see as sources of entertainment — Oduro-Frimpong points out that political cartoons are widely consumed by Ghanaian audiences in daily newspapers and on Facebook. He believes that many turn to this media precisely because of its political commentary.

“There are some things that you can say in cartoons that you can’t really print out. Politicians have money of course and they have influence so they can take you to court. But the visual commentary or visual critique is very poignant. For example, a government minister was caught having sex at a beach. And you can’t print that, but then Akosua [a Ghanaian cartoonist] drew a cartoon of a fogged-up SUV bumping up and down. That is something that people look for, because everybody knows what the cartoon is referring to. People are interested in what is said in the cartoon that cannot be said in print. The official discourse will not say it, because you might have a hard time backing it up. But when it is in the cartoon form, then you are good to talk about it.”

Although the study of forms of popular culture like political cartoons is still relatively new within Ghanaian academic circles, interest in these cartoons is constantly growing in the country. More and more newspapers are incorporating cartoons into their dailies, including cartoons from artists whose works are highly political, an indication, according to Oduro-Frimpong, of their popularity and importance. Newspaper reviews held on Ghanaian radio often discuss recently published cartoons, pushing the commentaries of cartoonists into a “larger political discourse,” only further highlighting the value of political cartoons for understanding grassroots civic engagement in Ghana.