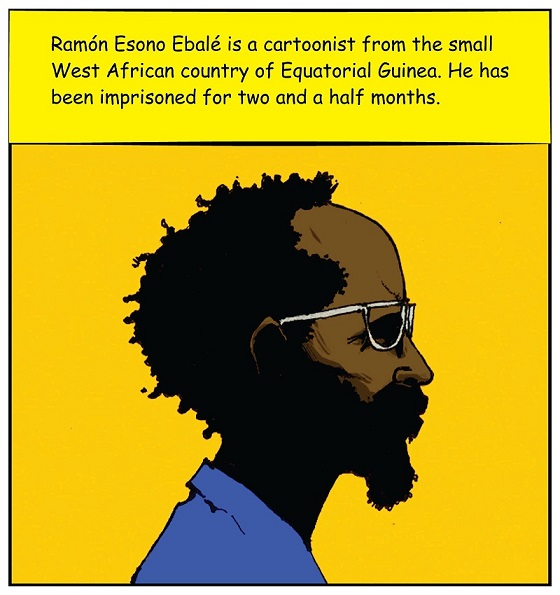 Image from “This Cartoonist is One Dictator’s Nightmare, And He’s in Jail For It” by Dante Besong and Andy Warner from The Nib.

On September 16, 2017, Ramón Nse Esono Ebale was detained without charge and then accused of “money laundering and counterfeiting.” He was targeted by Equatorial Guinea’s secret police for his political cartoons and graphic novel entiteld Obi’s Nightmare, critiquing the leadership of long-time dicator Obian Nguema.

In Rowan Moore Gerety’s article, “Comics without Captions: Can a cartoonist help unseat a dictator?” he ruminates on Esono’s fate stating that “The sense I’ve gotten is that what the Obiang regime is waiting for is some kind of full-throated apology which even if it isn’t really credible, would at least be viewed as kind of a victory.”

Read more about Ramón Nse Esono Ebale in the following articles:
“A cartoonist out to unseat a dictator is arrested” by Carol Hills from Public Radio International
“Oil, Instagram and the Plunder of Equatorial Guinea” by Lucas Oslo Fernandes from the New York Times